Highcliffe Castle has been described as arguably the most important surviving house of the Romantic and Picturesque style of architecture, which flourished at the end of the 18th century and the beginning of the 19th century. Its significance is recognised nationally by its Grade 1 status on the Statutory List of Buildings of Special Architectural and Historical Interest.

There is an international importance too. For a large amount of medieval French masonry was shipped across the Channel and used in its construction. It is this Norman and Renaissance carved stone, along with the Castle’s Gothic revival features and ancient stained glass, that make it appear older than it is. 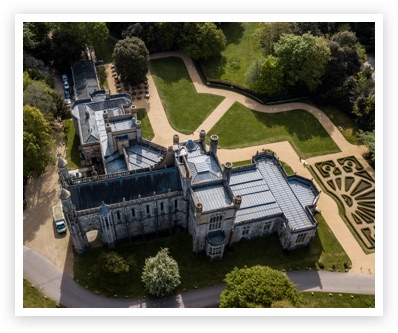 Built mainly between 1831 and 1836, the Castle is the realisation of one man’s fantasy. He was Lord Stuart de Rothesay, a distinguished diplomat. When he built Highcliffe Castle, he was following in the footsteps of his grandfather, Lord Bute, who had built an earlier mansion on the cliff-top site when it was just open heathland.

Highcliffe Castle’s remarkable history and tells how a magnificent building, once lavishly furnished in the 18th century French style was reduced to a fire-ravaged roofless ruin. For years it had played host to royalty, the rich and famous. Then for two decades, the 1970s and 1980s, only a flock of white doves came to stay amid the derelict rooms.

In the 1950’s the Stuart-Wortley family sold all the furnishings of the house before selling the house, it then became a children’s convalesce home.

Saw the castle sold again, this time sections of the grounds were sold off to build housing.

The castle had been bought for £14,000 by three senior Roman Catholic priests from the Claretian Missionary Congregation.

The castle was again up for sale as the priests could not keep up with the rising costs. This time it was bought by three local business men. Prior to the sale the castle was badly damaged by fire. Further exposure leads the castle to further deteriorate.

Scaffolding was erected around the castle to keep it from decaying further.

With funding from Christchurch Council and English Heritage work was started to provide new roof and repair the exterior masonry as well a to repair the south wing. erected around the castle to keep it from decaying further.

Saw the Winter Garden open as the visitor centre.

Greendale Construction were awarded a contract to upgrade the Great Hall to allow functions all year round, refurbish the dining room to allow for wedding receptions  and to create a level access for those with limited mobility.

Second Heritage Lottery Fund was awarded. This phase will see the restoration of the East Wing.

Works have started for the latest phase of the restoration with Greendale.

East Wing has officially opened from May 2019.

A versatile room with full length windows and spectacular views.

The State Dining Room is the Castle’s predominant function room.

It is estimated the two libraries could house up to 30,000 books.

Designed as the Castle’s hub, marble surround doors lead to most rooms.

Used throughout the 19th Century catering for lavish parties.

Woodland walks, outstanding views – there’s so much to explore!

Highcliffe Castle and Castle Shop is closed to the general public until 1st February 2020. For more information about opening times, please click here

We have a new job vacancy- for more information, please click here

New for 2020 is our Ecofest event on the 22nd March – come and explore our sustainable and reusable exhibitors.  For more information please click here